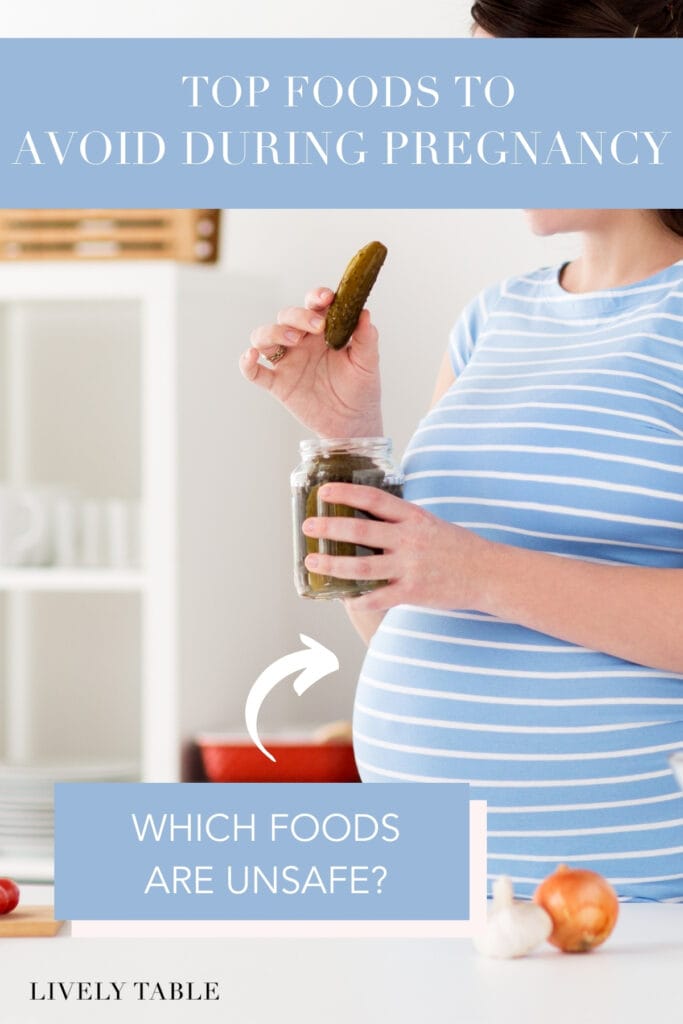 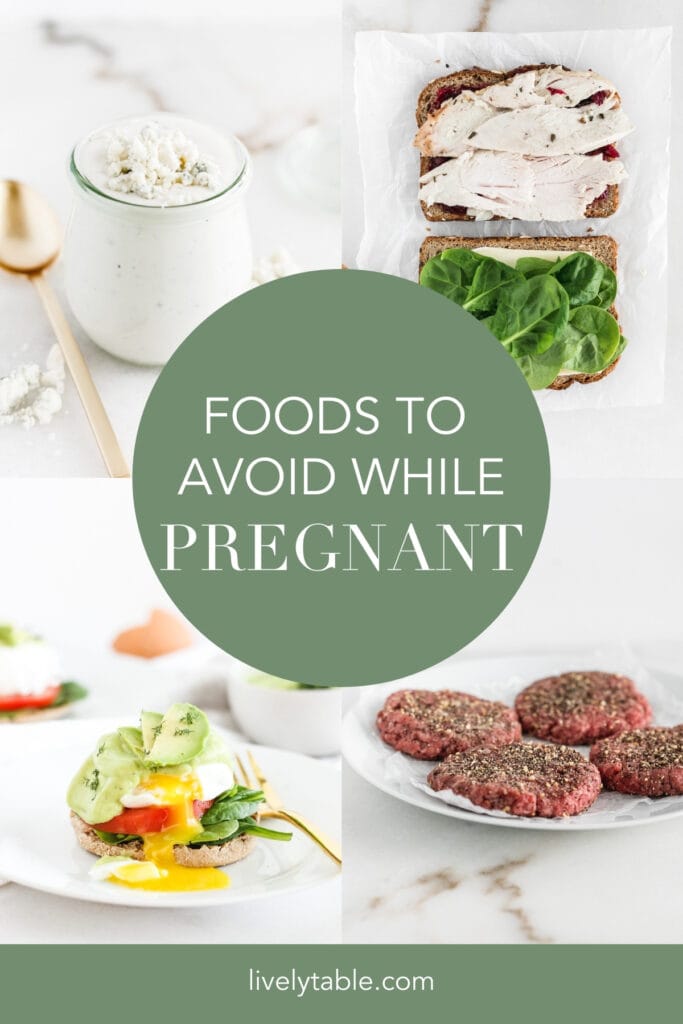 Which foods are unsafe for pregnant women? Here is a list of the foods you should avoid during pregnancy, and why, so you can nourish and protect your growing babe through all 9 months!

Pregnancy brings about a lot of anxiety for moms-to-be, especially first time moms. It's easy to question every little move you make, from the crib mattress you pick out to what you're eating for lunch. You may have heard that there are some foods you should avoid while pregnant, and you're right. There is a list of common foods that you probably shouldn't eat while pregnant. Normally I don't like to label any food as "off limits" but in the case of pregnancy it's a safety issue. Here's what you need to know about the foods to avoid during pregnancy.

Why are some foods off limits during pregnancy?

Most foods that you're told to avoid are for either your health or for the health of the baby. The main reasons being that they pose a risk to you, to the baby (in the form of wither birth defects or spontaneous miscarriage) or both. When you become pregnant, your immune system is not as strong - that's a good thing so that your body doesn't reject this unfamiliar creature inside of you! But it also puts you at a higher risk of foodborne illness. And while foodborne illness is generally pretty rare, especially here in the US, it's best to avoid the risk altogether out of an abundance of caution. Some health care providers are a little more relaxed about these guidelines than others, so if you have any doubts, make sure you check in with your doctor first!

Foods to Avoid During Pregnancy

This is probably the number one food (or drink, rather) to avoid during pregnancy. I know that in some countries, it's common for women to drink a little during pregnancy, but many doctors here in the US still agree that drinking alcohol during pregnancy is just not worth the risk of birth defects. Will a tiny taste of your husband's wine every once in a while at dinner hurt anything? No, probably not. But that's pretty much where I draw the line. Cooking with alcohol is fine, as heat will cook off the alcohol.

While sushi and rare steak is typically fine for non-pregnant individuals, it poses a higher risk of foodborne illness (such as E. Coli, Salmonellosis, and Campylobacteriosis)  in pregnant women because of your weakened immune system. Make sure that all of your fish, meat, and poultry is cooked to a safe temperature. That means 165°F for poultry, 160°F for ground meat and 145°F for steaks, chops, roasts and fish.

Raw (unpasteurized) milk and juice may be contaminated with Listeria or Campylobacter, two serious pathogens that could cause miscarriage or stillbirth if they infect the fetus. Make sure all milk and juice you consume is pasteurized.

Similar to raw milk, raw cheeses (those made with unpasteurized milk) such as blue cheese, feta, brie, and queso fresco, can carry Listeria, so it's best to avoid them. The good news is that most cheeses produced in the US are made with pasteurized milk, so you can still enjoy them. You can easily tell by reading the ingredients label on cheeses when you're at the grocery store. Imported cheeses are harder to tell, so avoid them if you can. Just be sure to keep cheese cold and not consume any that has been out at room temperature for more that 1-2 hours.

It is possible for egg yolks to contain Salmonella, so it's best to avoid raw or runny egg yolks (and unfortunately any foods made with them, like homemade Caesar dressing, homemade mayonnaise, etc.) If you really must have an egg with a runny yolk (I don't blame you!), some grocery stores carry pasteurized eggs, which are safe to eat undercooked. Many restaurants also use pasteurized eggs, but make sure to ask rather than assume. (I actually pasteurized my own eggs at home when I was pregnant because I couldn't find them in my grocery stores!)

Deli meats and cold cuts are another category of foods that can carry Listeria, one of the most dangerous (and most common) pathogens for pregnant women. Avoid cold cuts and deli meat unless they are thoroughly heated before you eat them.

The term 'smoked' can be misleading when it comes to cold fish cuts like lox. They haven't actually been cooked, so they aren't safe to eat unless you heat them to steaming hot first.

Raw sprouts, such as alfalfa and bean sprouts, are grown in warm, humid environments that are conducive to bacteria growth. Skip them until after pregnancy.

Seafood during pregnancy is great for you and your growing babe! But mercury is not safe for you little one. Avoid fish that tend to be higher in mercury: swordfish, king mackerel, tilefish, shark, and bigeye tuna (that's not the canned kind).

Saccharin is an artificial sweetener (aka Sweet and Low) that, though rarely used anymore, crosses the placenta and is not cleared as quickly by the fetus as it is by the mother. While it would cause a lot of saccharin to cause a buildup in the fetus, it may be best to switch if you consume it regularly.

Besides avoiding the above foods, you can take steps to reduce your risk of foodborne illness during pregnancy (and all the time!) by making sure to wash your hands before eating or preparing food, washing all produce thoroughly, and always keeping raw meat and poultry away from ready-to-eat foods like fresh fruits and veggies when handling them. Any leftovers should always be heated to 165°F, and avoid eating meat, fish, egg, or starch dishes that have been out at room temperature for more than 2 hours.

For a breakdown of healthy eating during pregnancy by trimester, be sure to download my free guide!

Kaleigh McMordie, MCN, RDN, LD, is a Registered Dietitian and Licensed Dietitian in Abilene, Texas, as well as a member of the Baby Led Weaning Dietitians Network.