This is THE best Southern cornbread stuffing recipe for Thanksgiving! It's rich, savory and full of flavor without using a ton of butter. This traditional stuffing recipe needs to be on your holiday table! (vegetarian, gluten-free option)

Favorite holiday food of all time? Mine is stuffing, hands down.

What could be better than a pan full of carbs? Bread AND cornbread with a rich, savory, buttery, brothy, herby flavor that only comes around once a year? Pass me a fork!

Many of my family's traditional recipes were passed down from my grandmother, who I never met as she passed away before I was born. I was given her Joy of Cooking cookbook, which she called her 'bible,' as a wedding gift, so I turned to it, hoping it might give me some insight into her Thanksgiving stuffing recipe. This is what Joy of Cooking had to say about stuffing and dressing:

"There is no set rule for the proportions of ingredients in bread dressing. It should be palatable, light and slightly moist, well-flavored but bland."

Each stuffing recipe in the book has very ambiguous measurements and ingredient variations that seem very open to interpretation. Hmmm. So that's why our family doesn't have an actual recipe for Thanksgiving stuffing.

So I guess I was going to have to make my own Southern cornbread stuffing recipe based on memory. Luckily, there is no shortage of Thanksgiving memories in my family!

The resulting recipe for traditional Southern cornbread stuffing I came up with is quite literally THE best stuffing we've ever had. My husband and I could not stop eating it. It's so flavorful, but not too overpowering. It's the perfectly moist but light texture, and honestly, if your measurements are off or you substitute a couple of ingredients, you're probably fine.

So it turns out Joy of Cooking was completely right with its unhelpful comments about stuffing. Try this Southern cornbread stuffing recipe for yourself and make it your own as you see fit. Maybe one day your family will have it's own traditional Thanksgiving stuffing recipe that can be passed down through the generations. 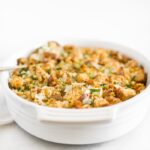 This is THE best Southern cornbread stuffing recipe for Thanksgiving! It's rich, savory and full of flavor without using a ton of butter. This traditional stuffing recipe needs to be on your holiday table! (vegetarian, gluten free option)