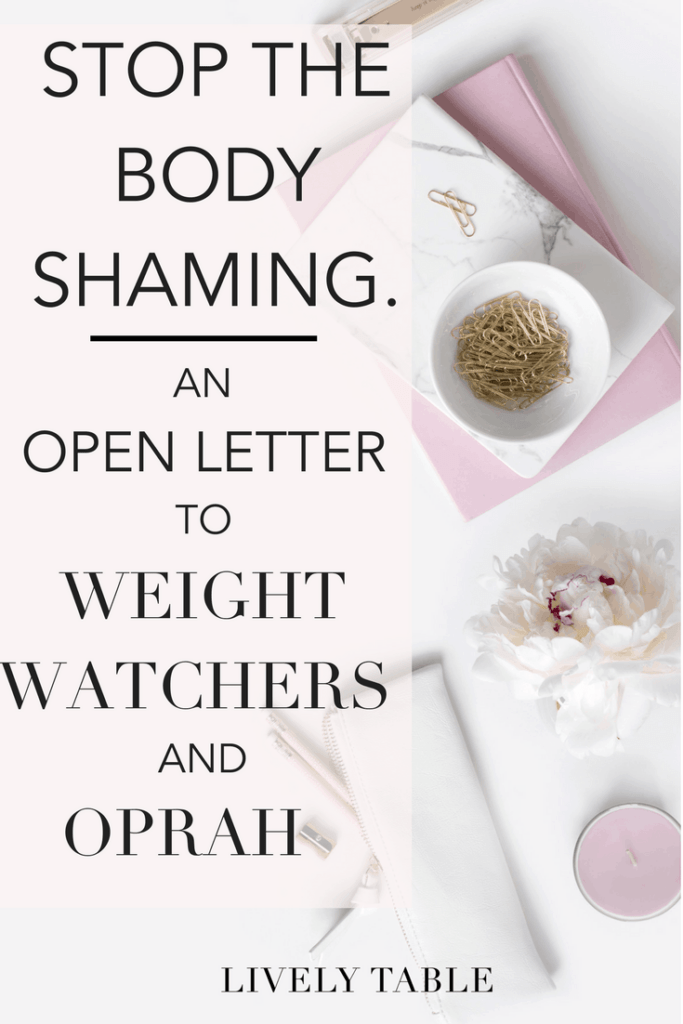 As a health professional who sees the destructive effect of the dieting industry and the diet culture on our society's women and girls, as a young woman who has suffered the consequences myself, and as an expecting mother to a little girl, I am deeply saddened to hear that you will be offering free memberships to teens.

We all know it. They set people up for the constant cycle of feeling bad about themselves, punishing themselves by limiting their food intake, overeating, then feeling guilty and limiting food again. And the cycle goes on and on.

You know this. That's why your program continues to make money. It continues to tell people very convincing lies. That they are not valuable unless they take up less space unless they fit into a certain pant size. That if they only lose weight, they will have all the happiness they ever wanted. You continue to profit off of our fat-shaming society. And you feed into it and disguise it all in the name of "health." You can say Weight Watchers is not a diet. But make no mistake. We all see your program for what it is.

Anything that tells people to ignore their bodies' physiological and psychological needs and their hunger cues, relying instead on external rules and limits on food is a diet. Anything that celebrates people for taking up less space is a diet.  And I get that you want to make money. We all need to make money. But you've stooped to a new low.

Preying on our young girls in a time when they are most vulnerable is just gross. Teenage years are some of the hardest in a person's life. Bodies are changing and pressure to be thin and accepted is high. Self-esteem is low. Risk of developing eating disorders is at it's highest as teens try to find acceptance while the world is telling them that they will only be valuable if they are a certain size and shape. By offering these vulnerable young girls a membership to your program, knowing very well that it will cause a life-long poor relationship with food and struggle with their bodies, you are making the problem worse, and you know it. You are telling them that they should manipulate their bodies in order to be liked and worthy. That they need to diet to be valuable. All to trap them in this cycle to ensure a life-long customer base so that you can make a profit.

It's irresponsible and it is disgusting.

I am terrified to welcome my baby girl into this world, not because of anything political going on or my own inexperience as a parent. I am terrified to raise a girl in a world where value is placed solely on appearance. Where the world is constantly bombarding her with messages that she is not good enough because she is not pretty enough, or thin enough. I never want my daughter to feel unworthy or inadequate because of a number on a scale. And you're making it harder every day.

And especially to you, Oprah. Shame on you.

You speak to the world about female empowerment. You tell women and girls that they can be anything. Just like you. You have achieved so much in your lifetime. You are a role model and a source of inspiration to so many young women and girls. By endorsing Weight Watchers and their latest scam, what message are you sending?

You are telling these girls that no matter how hard they work and how much they achieve, no matter how smart they are, they are worthless unless they are thin. That they can be the most powerful women on Earth, but they are only as valuable as that number on the scale or their dress size. That their only value is in how visually appealing they are.

That is not female empowerment.

That is extremely old-fashioned and disempowering. It's insulting to women who are smart, who are talented, who are kind-hearted. It is stripping away the real value in every woman's accomplishments and placing their value on an arbitrary number. It's telling them that they are nothing if they don't fit societal standards of beauty. That they are nothing more than an object to look at. Isn't that what you speak out against?

You should be ashamed, Oprah. If you really want to empower women, you should be trying to change our culture of fat shaming and placing value on appearance, not endorsing it. You should be setting an example and practicing what you preach instead of cashing in on your own poor relationship with food and body. You know how it feels to be stuck in the dieting cycle. Is that what you want for our young girls?

I don't blame you, Weight Watchers and Oprah, for wanting to make a profit. But doing it at the cost of another generation of young women and girls is disgusting. If you really want to empower people, take a look at your values and reconsider the damage you're about to do to this vulnerable population and my future baby girl.

To my readers: want to join the conversation? Speak out with #WakeUpWeightWatchers.