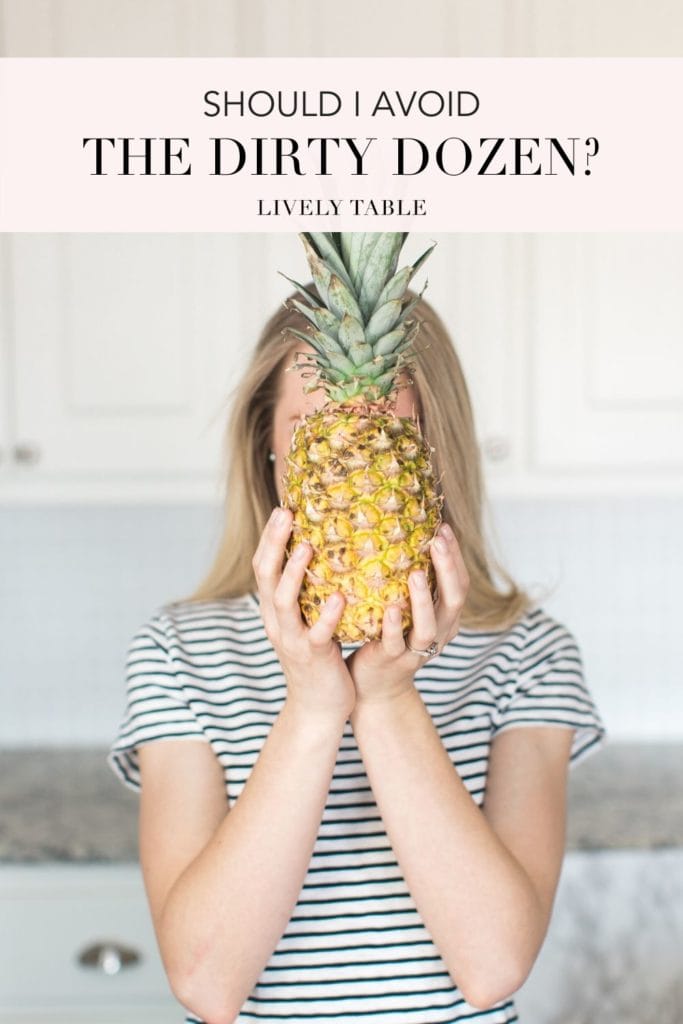 Should I avoid the 'dirty dozen'? That's a question I hear a lot now that the annual dirty dozen list has been released again. Here's a dietitian-approved, evidence-based answer.

The EWG has released their annual 'Dirty Dozen' and 'Clean Fifteen' lists again. Cue the hysteria.

I'm never about scare tactics when it comes to recommending which foods to eat, but I'm especially irritated with the release of the Dirty Dozen this year. It's incredibly irresponsible to make people more scared of food and stressed about health in a time where food is more scarce and people are more worried about their health than ever before. Rest assured, you don't have to worry about your produce, and I'm going to tell you why, using evidence-backed facts (unlike the EWG). But first, a little background.

What Is The Dirty Dozen?

The 'Dirty Dozen' is a list put out by the Environmental Working Group that ranks the fruits and vegetables they've found to have the most pesticide residue in the US. Sounds scary, I know. Nobody wants to be ingesting pesticides. However, the dirty dozen list is nothing more than a scare tactic, and here’s why.

Why You Don't Need To Fear The Dirty Dozen

The EWG Is Full Of Crap

The Environmental Working Group sounds super official and reliable, doesn't it? It's not. The EWG is an activist group, and they've got an agenda. They don't publish or use peer-reviewed studies (which is what we base recommendations on in the professional health world). The 'research' they conduct is full of holes. They don't release the methods they use, nor do they share their data. We need to know the specific pesticides found, how much was detected, and the effects of such pesticides at the levels found in order to determine risk. The EWG doesn't share any of that.

The EWG also doesn't test organic produce, only conventional, so organic produce could have more residue, but we don't know from their lists. Both conventional and organic farming uses pesticides, they just use different types. And very high exposures of both 'natural' and synthetic pesticides would pose a risk to human health. It's the dose that makes the poison.

Reports by the USDA consistently show that 99% of produce tested has residues FAR below the acceptable levels set by the EPA. 75% are below 0.01% of established limits (that's one million times lower). Furthermore, about 50% of produce has NO detectable residue at all. Many of the fruits and vegetables tested even meet requirements for organic in terms of pesticide exposure. In addition, all of the data and methods are publicly available.

You'd have to eat impossible amounts of even the 'dirtiest' produce to pose any safety risk. For example, I'd have to eat 453 servings of strawberries PER DAY without any effect, even at the highest amount of exposures recorded. Nobody eats that much produce (which leads me to my next point). You can use the calculator by Safe Fruits and Veggies (which is run by organic and conventional farmers) to see just how much produce you'd have to eat to be at risk.

The Health Benefits of Fruits and Vegetables Outweigh Any Risk

The benefits of fruits and vegetables are well established for preventing disease and overall health, yet Americans don't eat near enough. (Only about 13% of people meet the recommendations for fruit and less than 9% meet veggie recommendations.) The Dirty Dozen list only discourages fruit and vegetable consumption, especially for those who can't afford to buy organic.

There is No Nutritional Benefit To Organic Over Conventional Produce

Studies show that organic produce is no more nutritious than conventional. Both offer the same vitamins, minerals, and antioxidants that are important for health. Organic produce also doesn't have less pesticide residue, it just has different types. Whether you buy organic or conventional fruits and vegetables, you're still reaping the benefits.

Bottom Line: You Don't Need To Avoid The Dirty Dozen

Our food supply is perfectly safe. Our famers work very hard to ensure that they grow safe, nutritious food for us and for their families, and to comply with safety standards set forth by the EPA. The benefits of eating fruits and veggies far outweigh any risk. So buy whatever kind you like that fits within your budget. But you absolutely don't have to worry about pesticide exposure or avoid fruits and vegetables because an activist group tells you to.

To imply that fruits and vegetables are 'dirty' is a scare tactic. It's elitist and irresponsible. The way to clean produce is simple: just wash them. Yes, even organic ones.